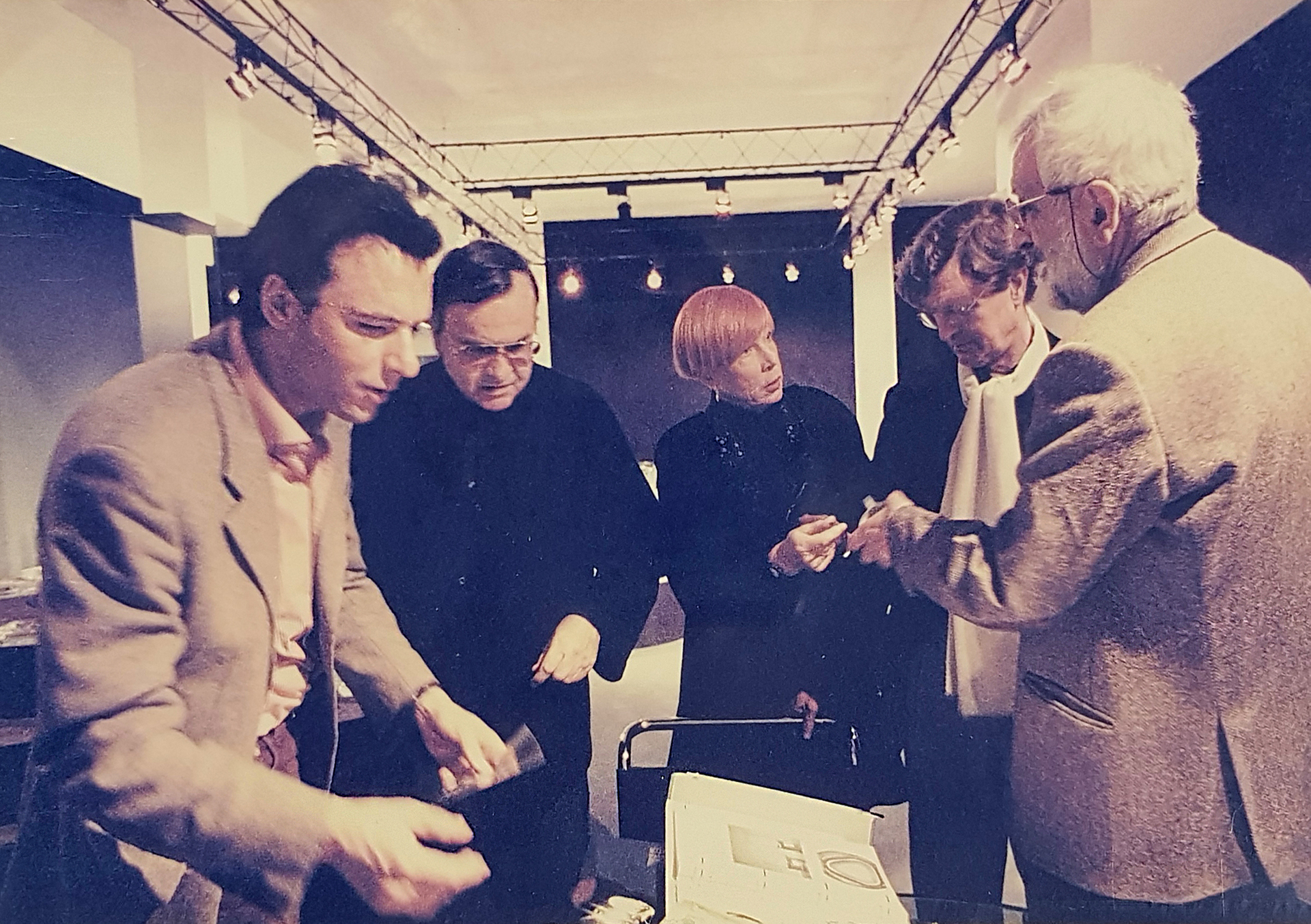 Years of collaboration with Arnolfo di Cambio, then the birth of the historic Conversazione crystal glass set. Our debates and exchanges with one of the greatest Italian design personalities.

Last night, I went to bed a little earlier than usual, as I wanted to chat and hug my partner Dasha, who was still awake with our two children aged 2 and 4. I laid down and immediately felt some strange sensations.

The article by Elena Stancanelli published by La Repubblica on October 20: “Lea Vergine and Enzo Mari, the magnificent obsession of love“, had struck me deep enough to stick on mind through the whole day. As I proceeded to translate Stancanelli’s words to Dasha, trying to convey every little nuance from the text, a sense of deep sadness for Enzo Mari’s passing pervaded every corner of the room.

I met Enzo for the first time in 1999 through François Burkhardt, a designer I had known since 1993. I had previously asked François to take on art direction duties at Arnolfo di Cambio by creating a separate catalogue, which eventually took the name “Arnolfo di Cambio CLEARLINE”. The idea was to invite more architects and designers to take part in our new collections, continuing on the path cleared by my grandfather Bruno and dad Gilberto back in 1962. Since the very beginnings, my grandfather, and even more so my dad, had decided to let their new “creature” Arnolfo di Cambio stand out of the crowd by involving a series of emerging designers to support the development of machinery aimed at speeding up the production processes, so as to make sure that not a single creative project would have been technically impossible to achieve. This is what led to the birth of Joe Colombo’s SMOKE back in 1962, Marco Zanuso’s PITAGORA in 1969, or CIBI by Cini Boeri in 1973, only to name a few. Each project, each prototype, carries a number of stories and anecdotes that would take way too long to tell right now.

But let us go back to Enzo. Thanks to François’ intercession, we managed to invite him to visit us in Colle Val d’Elsa along with Ettore Sottsass and Roger Tallon, so as to let them witness our production chain processes with their own eyes. Ettore, the eldest of the three, declined the invitation and asked for a meeting in Milan instead. There, he told me that he would have designed my objects in Filicudi, Sicily, during the summer holidays he had planned for the following year.

Ettore Sottsass and Roger Tallon arrived in the middle of a winter night battered by heavy rain. As a warm welcome, I took them to one of the best restaurants in Colle Val d’Elsa, where I had reserved the most beautiful table at the entrance. We all sat around a huge round table: Enzo (who chose the most beautiful chair), Roger, François, his lovely wife Linde, and myself. We enjoyed our meal in a pleasant and informal atmosphere. At the end of dinner, Enzo and Roger asked the waiter to bring them a sheet of paper. They started playing designers, sketching just for fun. The next morning, I picked them up shortly after dawn, since the working day of a glass factory starts at five in the morning. We were all kind of sleepy and a bit worn out by the dinner we had the night before, plus the journey and that extremely early morning hour. Nevertheless, we entered the factory and spent more than an hour watching glassmakers at work, hypnotised by the crimson dawn and surrounded by the fumes of crystal, the noise of beaten rods, the sounds of the factory.

We then moved to the showroom to look at the finished products: the countless technical questions they kept asking me for hours were a clear sign of their passion for work. I fell in love with all my guests on the spot, fascinated by their temperaments and knowledge. Culturally speaking, I felt and still feel tiny compared to them: how many times had François named people I did not know or made quotes that sounded completely obscure to me? Most of the times, I found myself answering “No, I don’t know him, sorry François, I am very ignorant… But please, enlighten me…” And so, little by little, François ended up adopting me as a son, he took me by the hand into the world of design. Such a fascinating and extraordinary world it was. 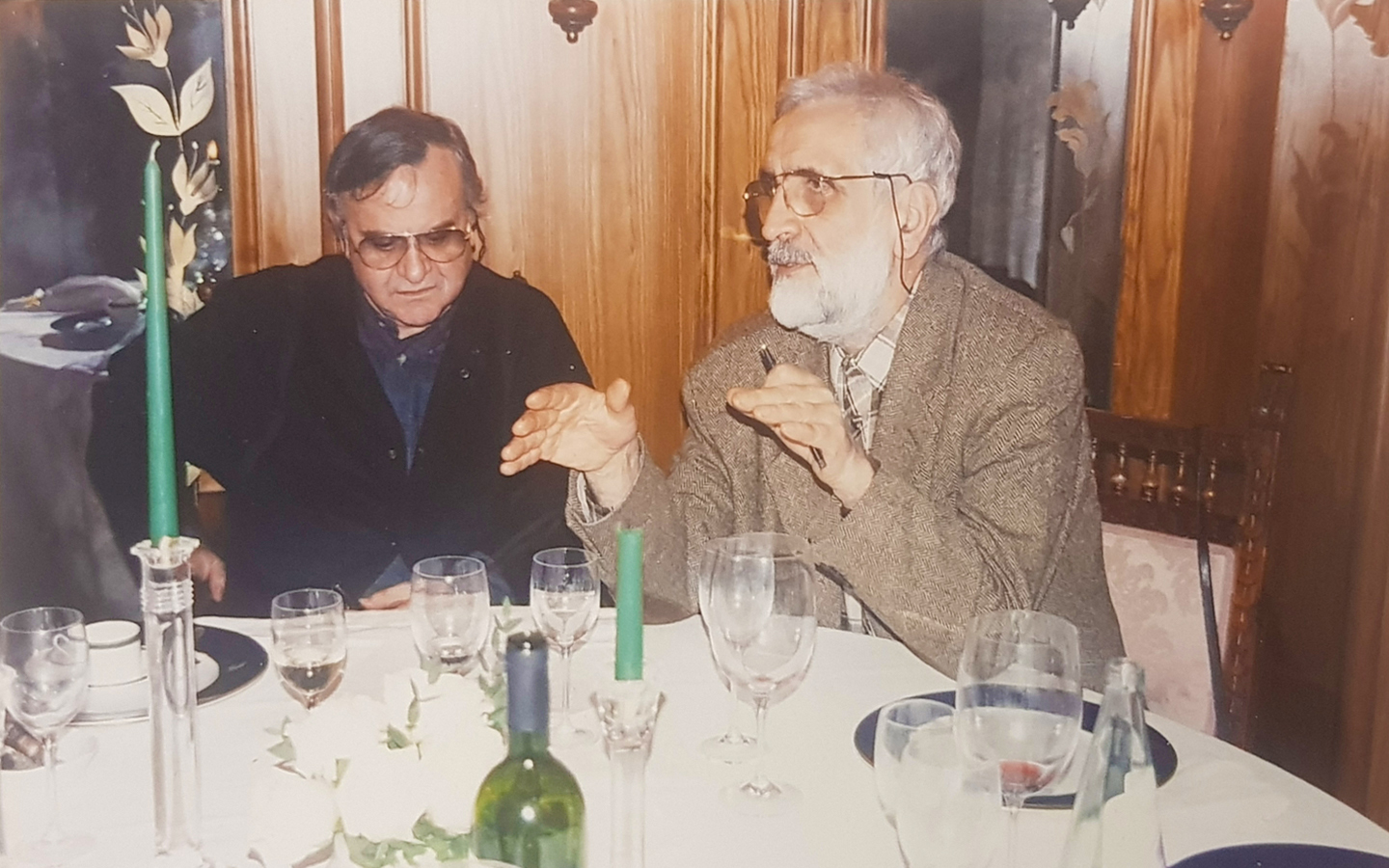 Enzo Mari has certainly been the designer I’ve had most relationships with: we spent a lot of time together on a regular basis between 1999 and 2004. I always preferred to visit him in person at his studio in Milan, Piazzale Baracca, a place that had been dear to my heart since my earliest childhood memories. I used to live in via Soresina, a small by-street from Corso Vercelli, and from 1st through 8th grade I had attended the Collegio San Carlo, in the nearby Corso Magenta. After our meetings, I would often give Enzo a ride home, which he normally reached on foot with that peculiar walk of his, always observing everything around him, trying to grasp every little detail in the surrounding world.

Going to see Enzo had always given me very strong emotions, he often left me hanging between love and hate, between curiosity and annoyance for his continuous “rebukes”. I always arrived there full of fears, and left with my head in great confusion, often after being verbally insulted or abused, yet constantly enriched by his great cultural and professional stimuli. That long dark corridor I had to cross to reach his office seemed always infinite to me. Whenever I entered the room, I always found him sitting at his desk full of antiques, barely illuminated by soft light. I breathed a kind of air that only he could transmit to me, always with my heart up into my throat, frightened by the design or corporate culture lessons that I would soon have had to endure. 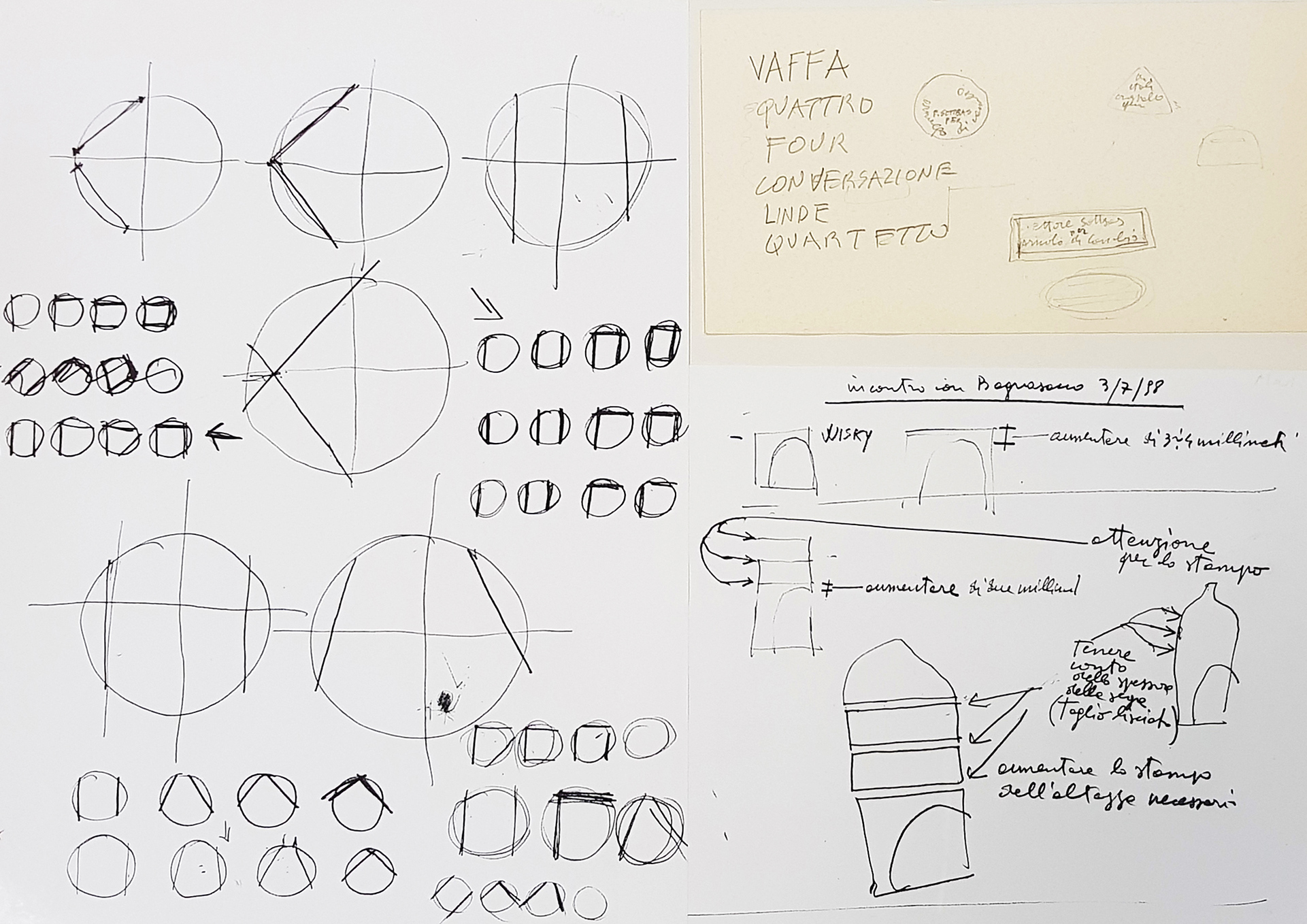 One of the first times I paid a visit to him at his studio, Enzo asked me what I would have liked him to design for Arnolfo di Cambio. “A new glass”, I soon replied. After browsing through the catalogue, dwelling on all the shapes he deemed correct (not that he liked them, for heaven’s sake: but at least he found them functional…), he ended up saying: “I don’t think you actually need to make new glasses, the catalogue already has a few beautiful ones that perform their function well… I don’t believe in decorative glasses, like some of my fellow designer colleagues who draw them crookedly, or in strange geometric shapes that make them impractical. ” However, soon after that, Enzo took a recycled sheet of paper and started sketching a few shapes with his pencil: a cylindrical one, soon followed by conical, rounded and flared variations. He really saw no other functional and logical shapes for a glass, so he provoked me by asking: “Do you want me to draw you a nice cylinder or a nice cone? But you already have these… What’s the point in making a new glass? “. I knew my reply had to be very careful: “Yes, but these shapes are already there, I came to you in search of something new…” He immediately answered back: “You industrialists are always chasing the market and the consumers’ demand, always in search of novelty, but what’s the point? A glass is a glass, you have so many beautiful ones, why do you want a new one? ” I was speechless and did not know how to continue the conversation, so I opted for silence, sporadically looking at Enzo and staring into empty space for the rest of the time. I hoped for a constructive intervention to break that heavy silence as soon as possible.

After a few interminable minutes, Enzo asked me: “Anyway, what is so unique about your crystal? How can you tell it from glass? ” “It’s because of lead”, I replied, “which has much better refractive properties compared to standard glass. Therefore, by means of sharp edges and cuts, those light reflections can be truly maximized.” Enzo thought about it for a while: “What if we cut this cylinder with grindings?” In the following minutes, a series of sensible hypotheses started flowing along with other options that were clearly unattainable. At a certain point, Enzo brought eventually order into this chaos, saying that we could think of four different edging options, thus making a set of 4 glasses of the same shape, but with different cuts. At that point, I told him that in addition to a low and wide “tumbler”, I would also have liked to make a taller and narrower goblet, along with a water glass and a wine glass. Therefore, the four shapes were soon multiplied by the four cuts he had proposed, for a total of 16 new products.

Such was the birth of the “Conversazione” series, a name coined by Enzo himself. We devoted ourselves to the project for a whole afternoon, and I still have the card where he wrote all of the different name options he suggested.

Our relationship ended without ever having a proper argument. At a certain point, after yet another meeting filled with the usual “insults” and constant provocations, I simply decided not to visit him again and not to look for him anymore. My “obsession” was waning.

Enzo had me delivered various messages through mutual acquaintances, but I did not accept his invitation to contact him again. Today, I sit here thinking about what Enzo taught me and the fact that I didn’t really have the chance to thank him. Indeed, I had just run away at a certain point, as I simply could no longer handle our conversations, psychologically speaking. But his teachings are deeply rooted within me. Now that I have reached the age of 52 and 20 years have passed since those days, I can definitely say: “Thanks Enzo, you have been a true, great teacher”. 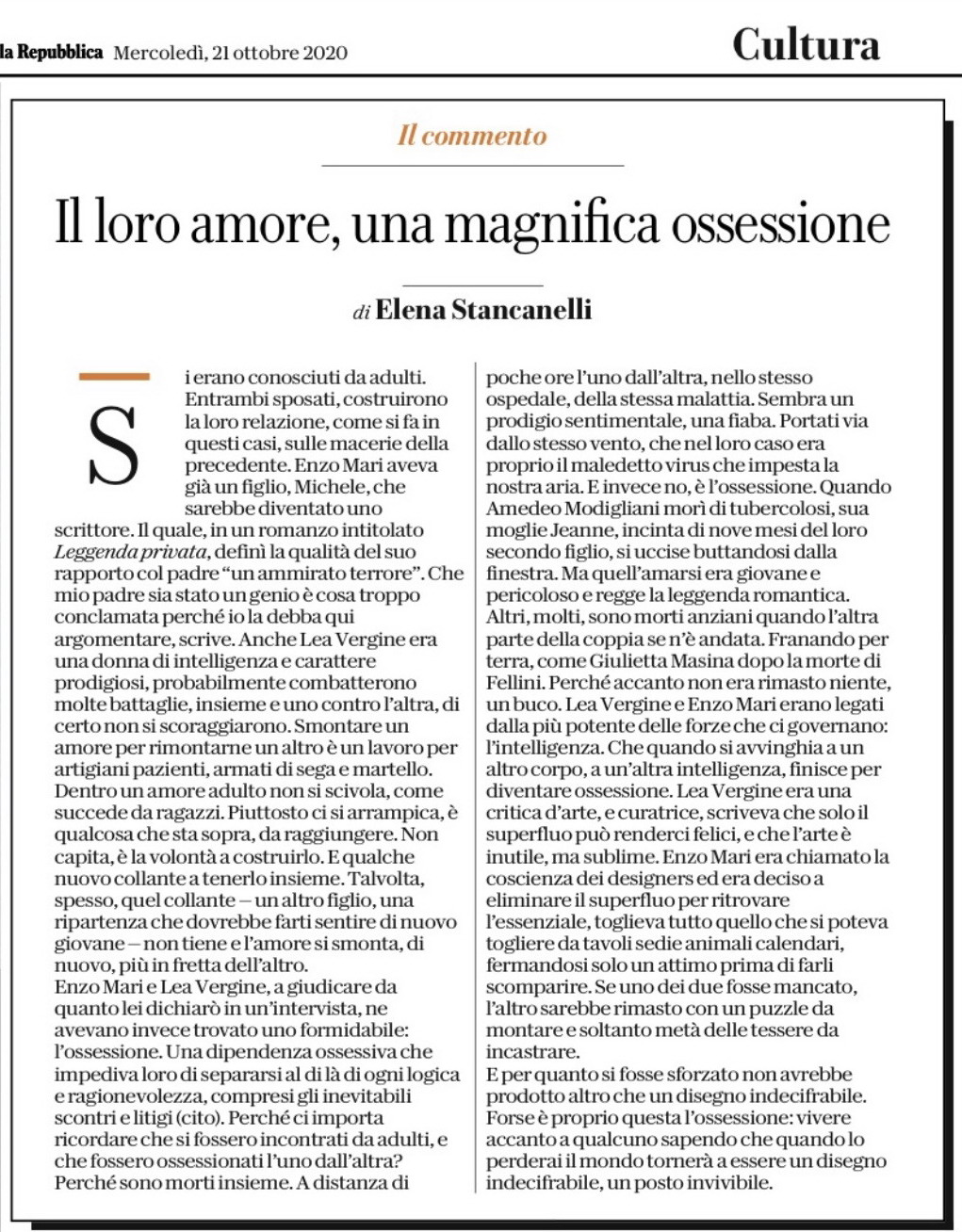